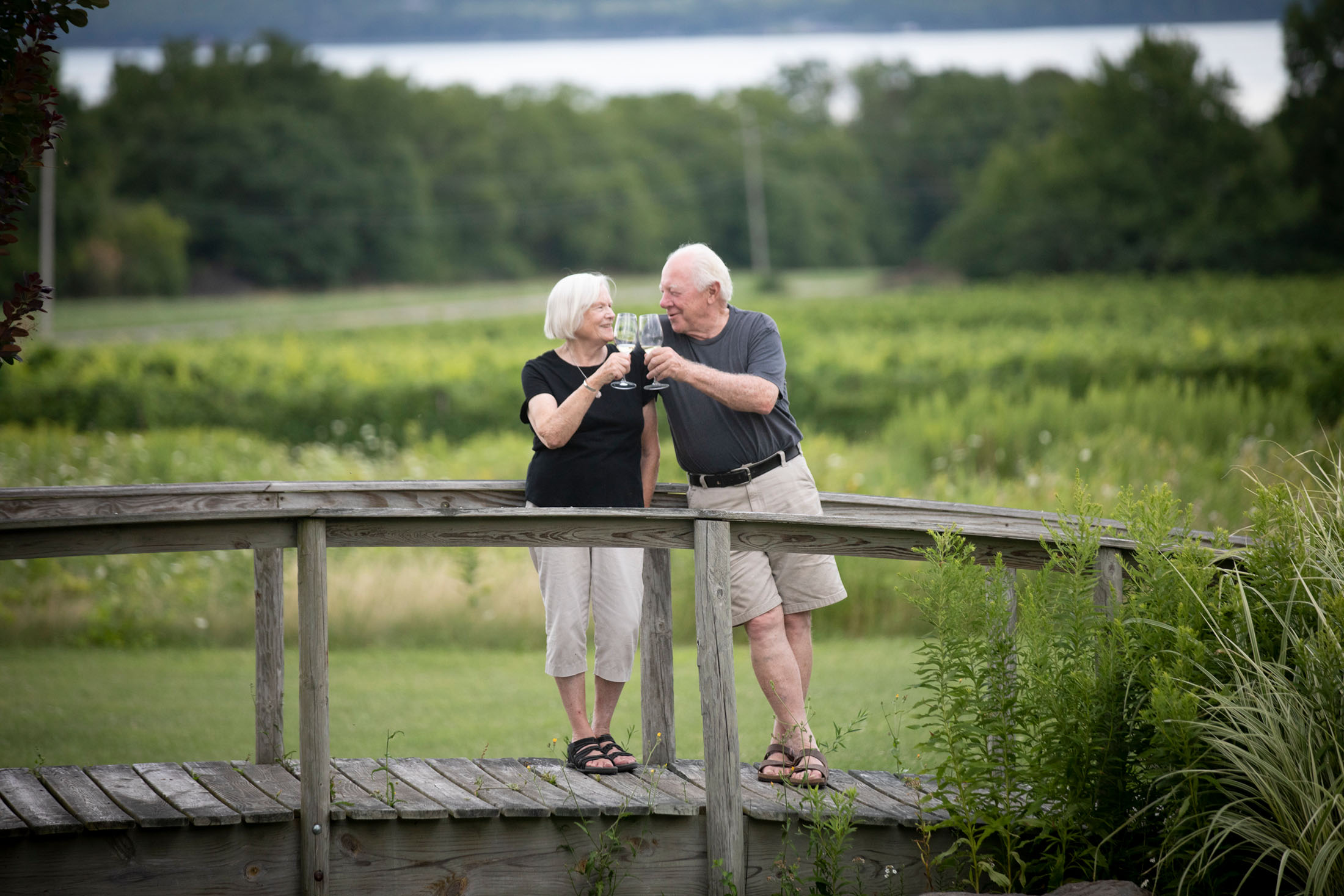 Ann grew up in Rochester, New York and the New York City suburbs of New Jersey; John grew up in the same New Jersey suburbs. After working in teaching (Ann) and Peace Corps and business (John), they moved to Yates County in 1973 to grow grapes and raise their family on 100 acres overlooking Seneca Lake. Ann managed the vineyard and raised the children, while John worked for Cornell University at the Agricultural Experiment Station in Geneva, New York. The grapes from their vineyards were first sold to the Taylor Wine Company and eventually to wineries across New York State.In 1990, Ann and John Martini opened Anthony Road Wine Company with wines made from the 1989 crop. The first building was a renovated farm shop and the equipment was at best an eclectic collection of used and borrowed tanks and pumps and an old apple press. Their children, Peter, Sarah, Maeve and Elizabeth, have been involved in the vineyard and winery throughout their growing years and beyond. Peter, is the vineyard manager at Martini Vineyards. The joy of growing grapes and producing fine wines still motivates and excites the Martini family – more than a quarter-century after the first vines took root. 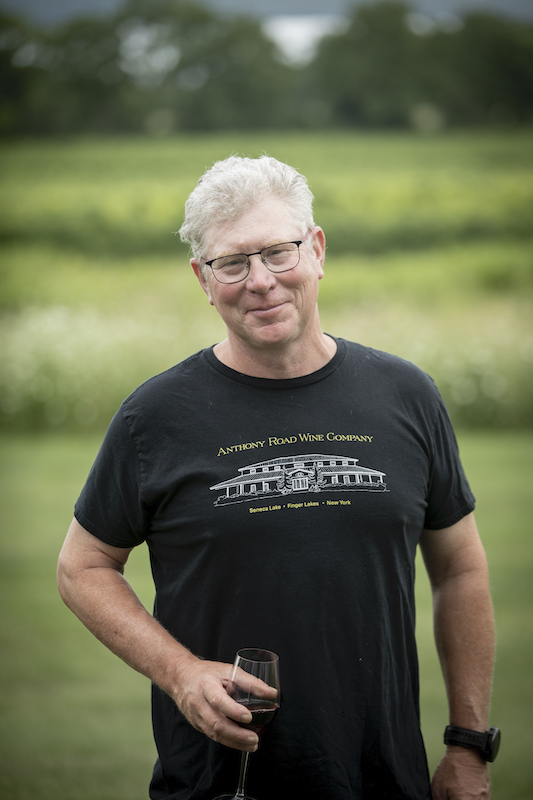 Peter Martini grew up on the family farm, working in the vineyards from a young age. He graduated from Clarkson University in 1990 with a BS degree in business management and moved to Jackson Hole, Wyoming for the summer season. Nine years later, after working as an automotive technician for one of Jackson’s premier shops, he and his fianc�e decided to move back to the Finger Lakes and the family business.After working for a year in the vineyards Peter was given the responsibility for managing the vineyard operation for Anthony Road. Recent plantings of Cabernet Franc, Lemberger and Pinot Noir have been added to the existing Riesling and Vignoles acreage.Beginning in 2002, Peter started managing our joint project with the Young family of California and planting the first section of the new vineyard on Nutt Road. Excited about this endeavor Peter says, “this project has been great for Anthony Road and for the Robert Young Family. It has brought the Finger Lakes more credence as one of New York’s premium grape growing regions and as a national contender for fine wines.” There is always a lot to do in the vineyard, but if you have a question about how the grapes are growing or our management practices, please feel free to e-mail Peter Martini. 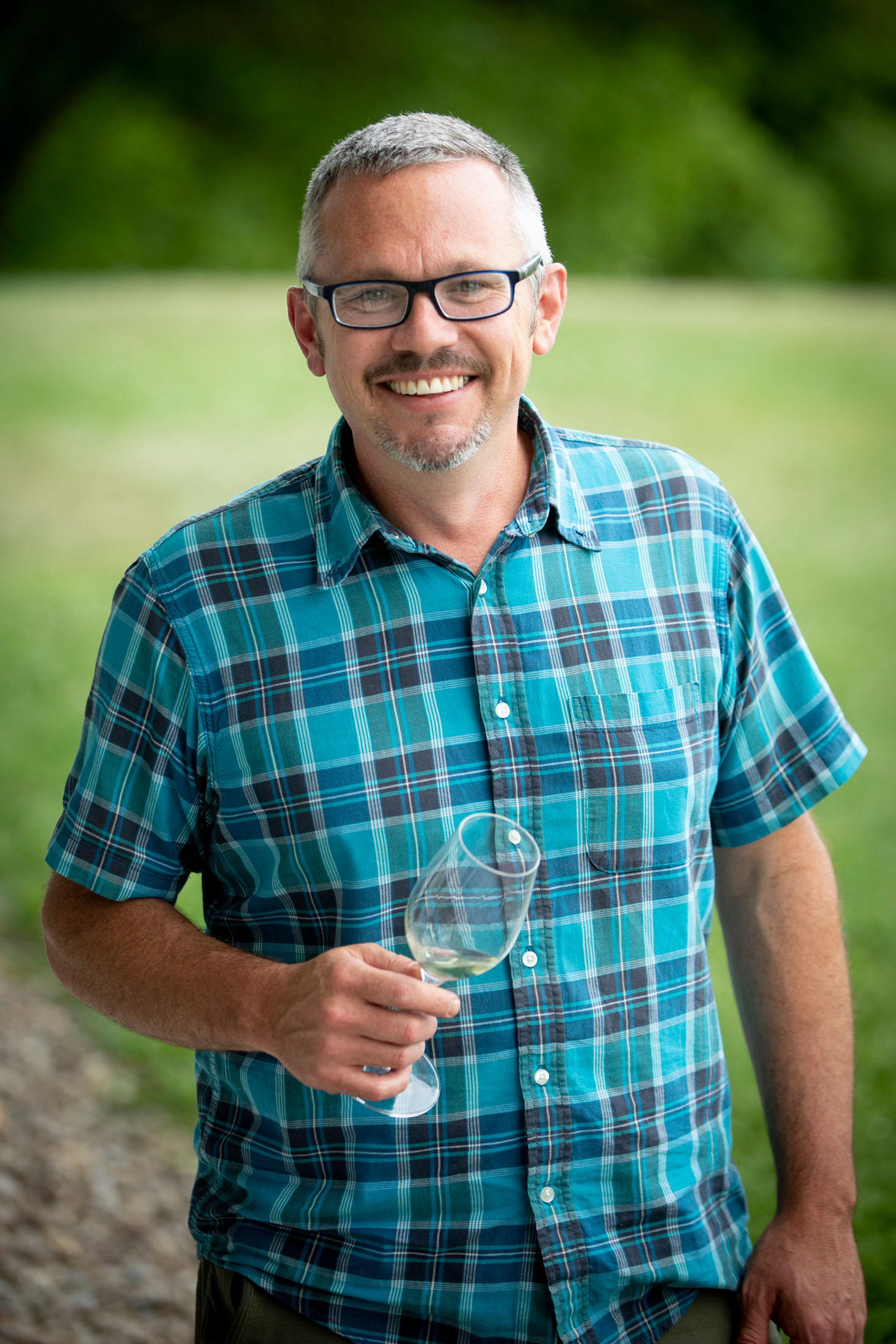 With an education in Fine Arts and an incarnation as a casting director for a fashion photographer in New York City, it was only natural that Peter would end up becoming a wine maker in the Finger Lakes! Peter was bitten by the the proverbial wine bug and found his life moving quickly in a new direction.A chance encounter with winemaker Johannes Reinhardt in the Anthony Road tasting room on a slow day in May of 2006 led to a cellar visit. Peter attributes the special tour to his feisty chocolatier wife Cary who boldly asked Johannes what they had to do to get a barrel tasting. The afternoon was spent with talk of German and Austrian wines and free samples of CaryMo Chocolate. As Johannes was walking to the car with the couple he happened to mention that he is always looking for help during harvest. Cary jumped at the opportunity and volunteered her husband! Peter was perhaps to elated to even speak but numbers were exchanged and Peter started that fall and stayed on splitting time between the vineyard and cellar. He moved into a full time assistant winemaking position in 2008. He has worked closely with Johannes ever since hence learning from one of the top winemakers not only in this region but in the United States.“Finding my voice as a winemaker in a region that is coming into its own has been a privilege. My mission is to respect the quality of our fruit and make finished wines that speak of the vintage and our unique site. I feel that winemaking presents a lifetime of learning in that each vintage is so variable for year to year that there is never time for complacency. The opportunity to become Head Winemaker and continue to make the world class wines that Anthony Road and Johannes have established is a dream, so please don’t wake me!” 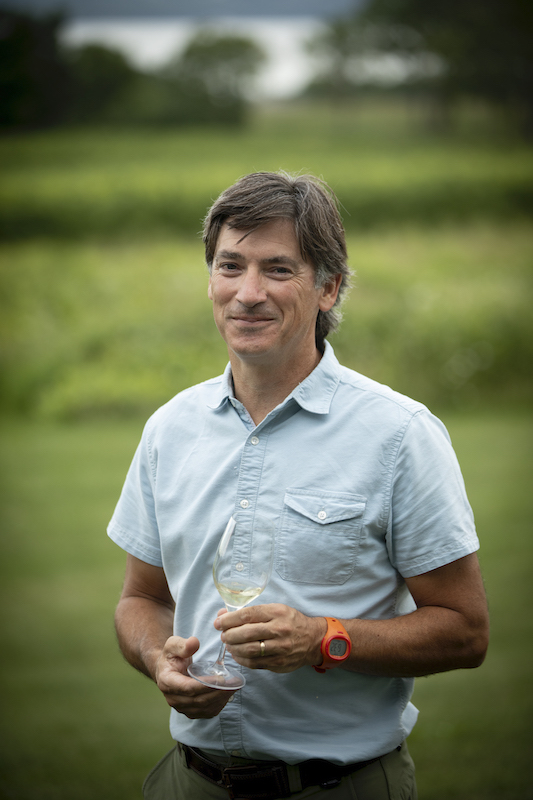 Michael married into the Anthony Road Wine Company family in 1999 and has literally enjoyed the fruits of others’ labor. Slowly but surely he realized that involvement in the family business would be inevitable, and unbeknownst to anyone else he took on the self-appointed, pro bono position of ARWC Brand Ambassador. While secretly learning about the wine industry from afar, Michael held down a day job as a: US Navy Deep Sea Diver, Commercial Diver, Collegiate Coach and Sales Engineer. In the fall of 2015 Michael officially joined the ARWC staff earning his first company paycheck cleaning press deck and cellar equipment in support of harvest; just like any self-respecting Vice President of Sales should. He enjoys all things outdoors, biking on and off road, camping, hiking, javelin catching (wait… what?) and spending time supporting his family’s multitude of activities. 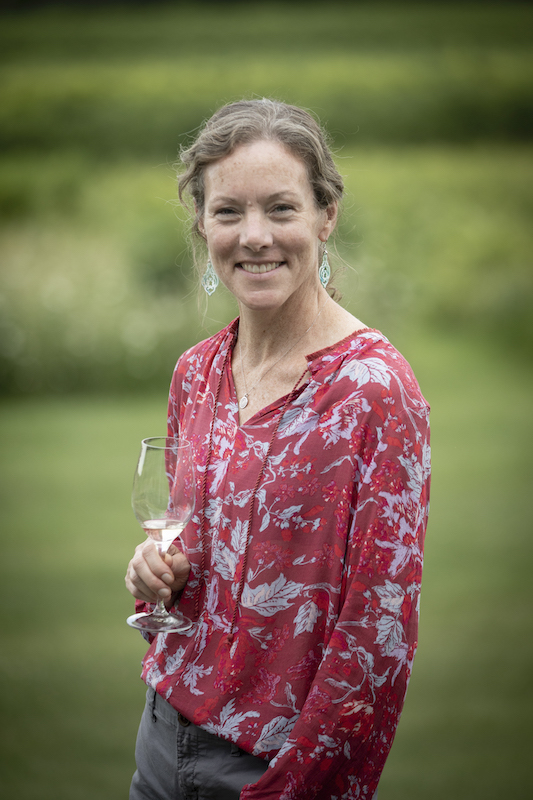 Sarah grew up on Anthony Road, she left for school, adventures and careers elsewhere. In 2013 she left her profession as a registered dietitian to work full time in the family business. Sarah and her husband Mike have 4 children and live in Geneva, NY. Running has been and continues to be a lifelong passion, racing in all distances and terrains since the age of 13. 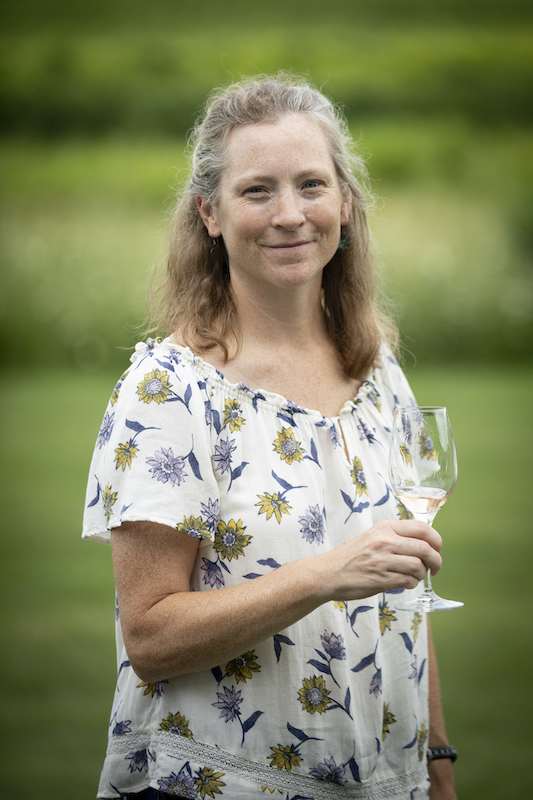 Liz returned to the winery in July 2013 as Tasting Room Manager after taking time off to raise kids, chickens, ducks and a very weedy garden. She & her husband, Sam, live on Keuka Lake’s east side, up on the hillside with their 4 children. 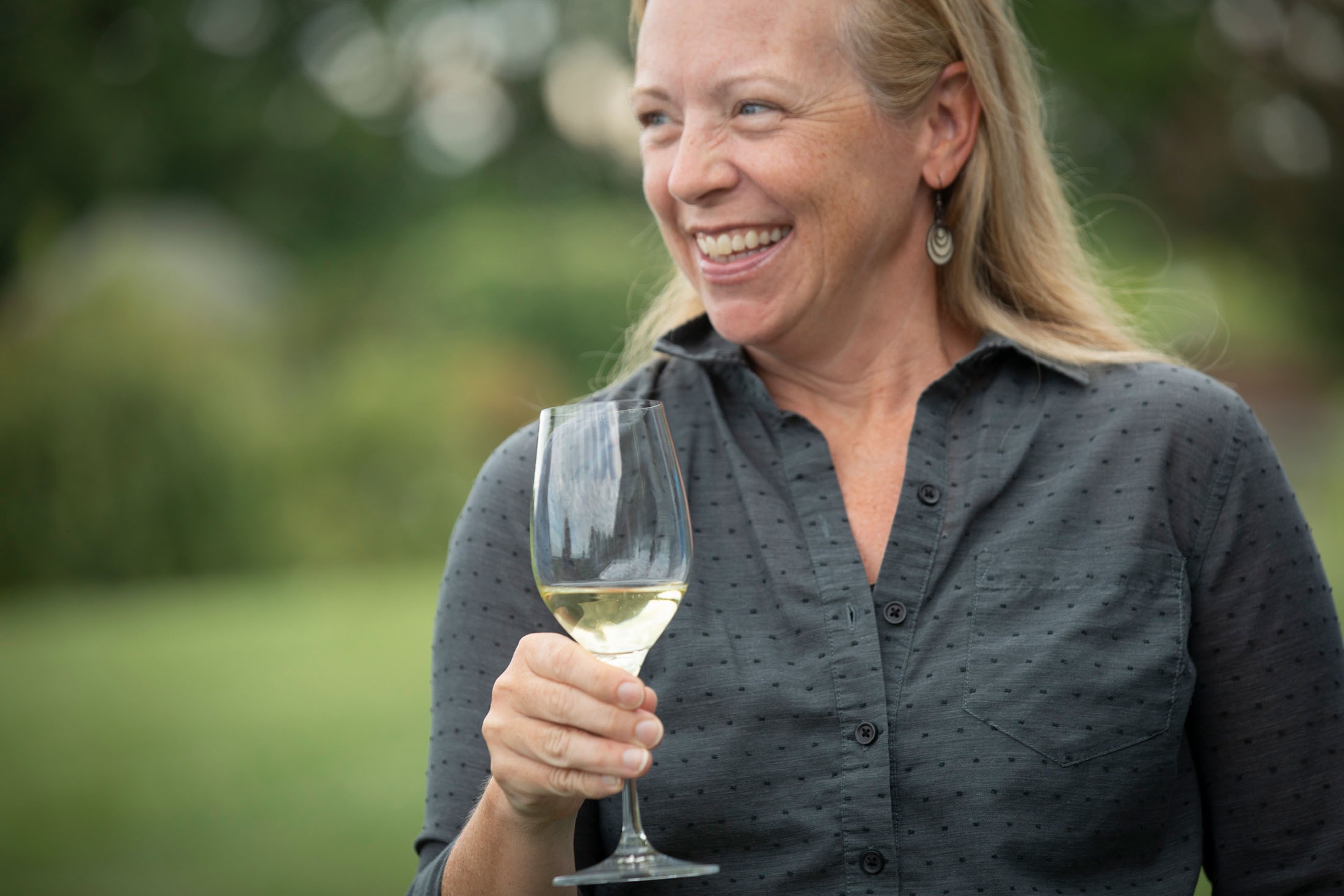 Maeve grew up on the family farm but knew she always wanted to be a nurse. She obtained her nursing degree from St. John Fisher and worked in the nursing field for 24 years. During that time she, along with her husband Peter, raised three children in Irondequoit, NY enjoying all of their sports, activities and interests. She and Peter have recently moved back to the family farm where Maeve can once again be a part of the family business. 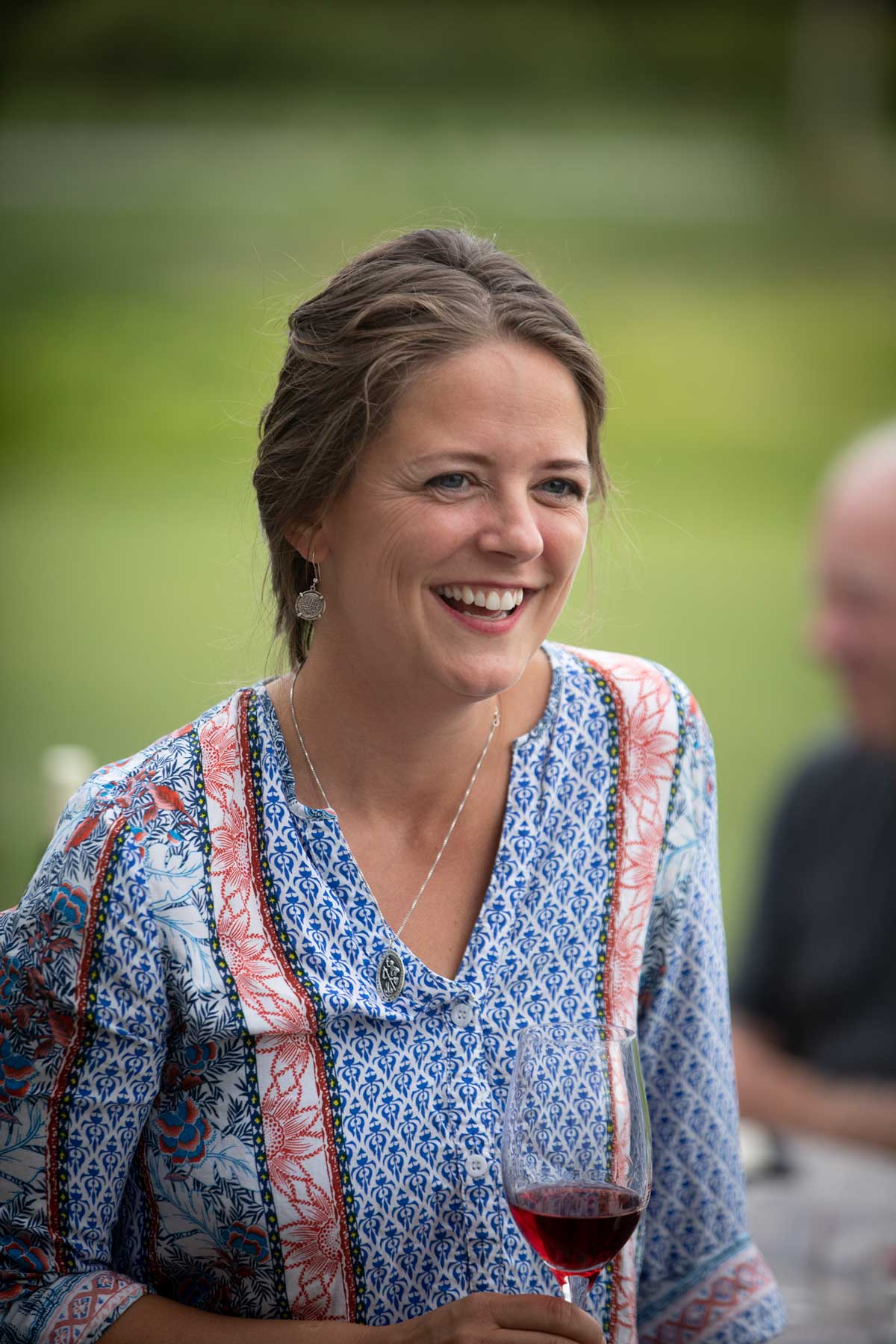 Hi! My name is Natalee- which means Christmas- and since my last name is Carroll every year around the holidays at least one of my 3 siblings will call me ‘Christmas Carroll’. I kind of like it since Christmas is my favorite holiday anyway. I just love all of the cooking and baking, seeing cousins and other relatives from near and far. My favorite is sneaking off with a sibling or two, maybe an aunt or my dad and visiting the nearest pub. Enjoying a glass of wine (usually a Cabernet Franc) with the people I love is the most enjoyable activity I can possibly think of. If it’s not for the holidays, I am a huge fan of day-drinking in the summer sun! Summers on Seneca Lake are incredible and I am especially grateful to be in a position where I can not only enjoy them but I can share the experience with others. I love hospitality so when the opportunity to host events and wine club member parties came up- I jumped! Well, actually my heart started racing and I fumbled to pull up my resume and make some needed updates, but you get the idea. This is my element. Connecting with chefs to figure out which delicious foods to provide, discovering local musicians each with their own original flare to set the tone, and sampling the amazing wines that Peter and Lynne make all culminate in what amounts to an insanely awesome gig that I am super blessed to have. I am excited to meet you, share a glass, and introduce you to this amazing family and their winery. Cheers! 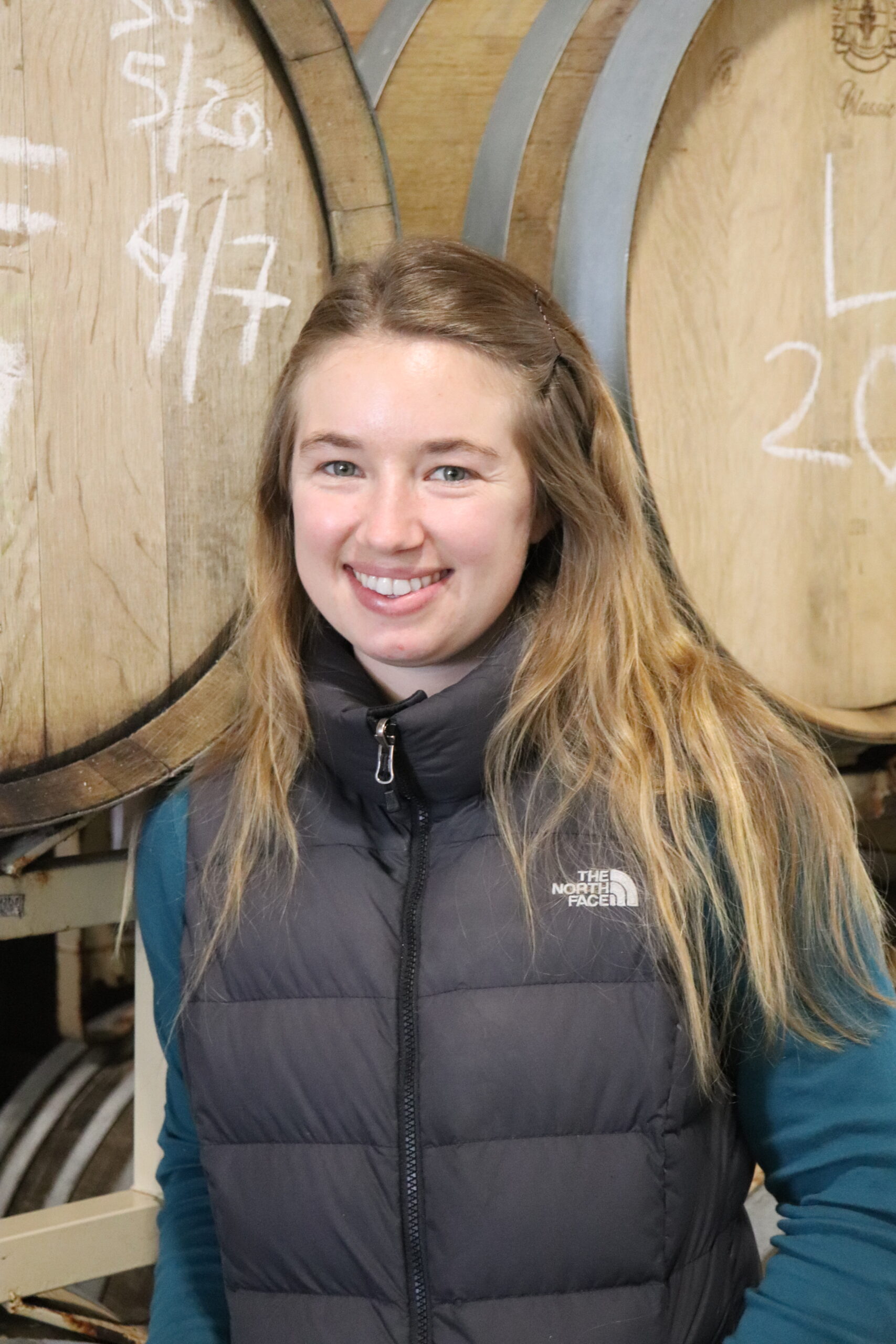 A California native, Taylor studied Viticulture & Enology at UC, Davis. After four harvests split between the northern and southern hemispheres, her interest in cool climate winemaking was peaked. “I am so excited to be part of such a fantastic grape growing and winemaking team and to work with varieties that excite me more than I can even put into words. I am thrilled to be a part of this company and the winemaking community here in the Finger Lakes.”

What people are saying...

We fired up the bottling line today to put these b

There is still time to stop in and enjoy June’s

welcome to anthony Road wine company! Please verify that you are 21 years old+

By clicking SUBMIT you verify that you are 21 years of age or older.